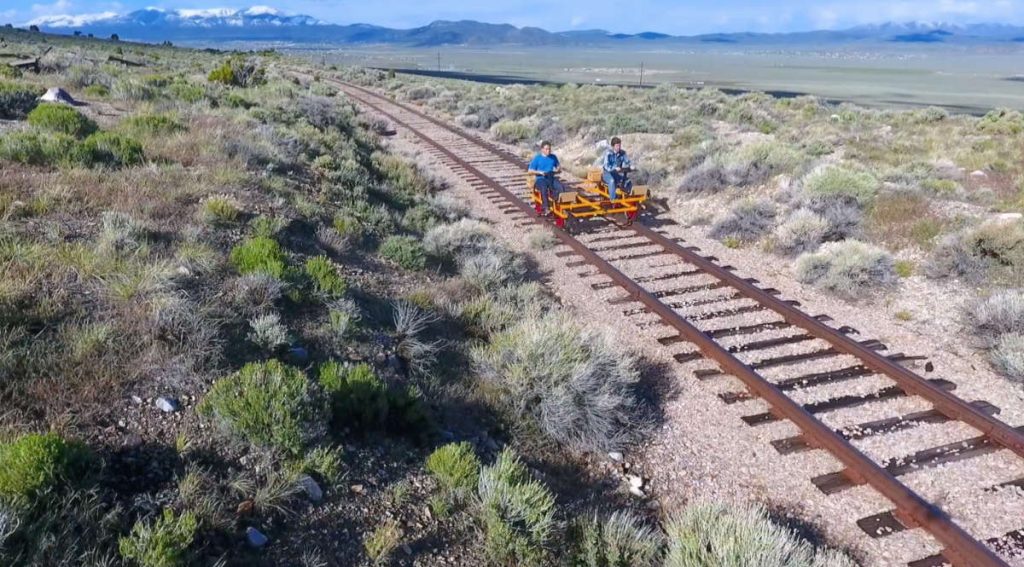 We finished a shake down run for our new touring handcar in Ely, Nevada. We put over 100 miles on the handcar testing it over the grueling railroad grades of the Nevada Northern Railway. As part of our test we propelled the car up the steep eight mile Keystone Line. This route is normally challenging with its 2% mountainous grades. The same route on a traditional handcar requires about two hours to reach the top. The new touring car made it up in just over an hour, with little effort. The prospect that our handcar can climb grades opens up opportunities for rail lines with steep gradients like those found on Central California’s Monterey Branch. The car performed excellent with only a few minor items needing attention. We also gave rides to visitors of the tourist railroad and the reception was better than we expected. People loved the new handcar!

The weather is unpredictable in the high Nevada deserts.  We are dropping down on the .4% Nevada Northern Railway High Line and the winds kicked up to 35 mph.  The touring handcar handled the situation with ease and we were able to keep the speed at 8 mph on the way back to the depot in Ely.  The handcar’s inventor is Mason Clark and is directly in front of the camera.  His cousin Saxon Robbins is to the guy to the right.  Saxon has been a huge help in testing the handcar and also assisting in manufacturing some of the handcar components.